Availability: not in Stock

This image is now offered in the NO RESERVE PRICE Auction on Catawiki.

Japanese woodblock print “Shiawase mitsumete” (Gazing at the Happiness) is by Fu Takenaka (1945- ) Very cute owl print. In Japan, owls bring luck and offer protection from suffering. The reason can be found in the Japanese name for owl, Fukuro, which can be written in different sets of characters: One with the meaning of luck ( fuku, luck; ku, to come; ro suffix used in boys’ names), and the other as protection from hardship ( fu, no, kurou hardship, suffering).

Fu Takenaka was born in 1945. She worked for a design company and started late with printmaking, in 2003. The artist works in the technique of the Japanese woodblock print. Fu Takenaka is a member of the Japanese artist association Nihon Hanga-in and well known in Japan.

The condition is perfect.

Will be send very well packed between hardboard plates, to prevent any damage in transport, worldwide with track and trace and insured. 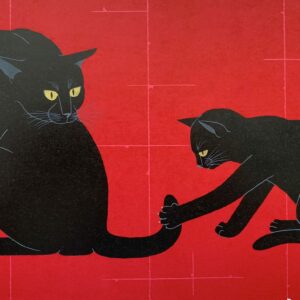 “Playing with” 2015 – Hand-signed by artist and numbered 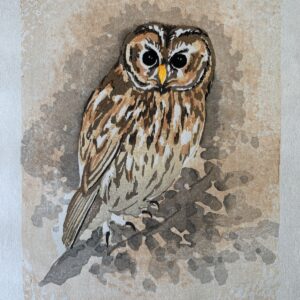 “Happiness”. Signed and numbered by artist 24/28